Police Departments and Public Safety organizations have a long history of fielding bagpipe bands, particularly in larger cities in the northeastern US. The idea of forming a pipe band within the Wilmington Police Department was that of then Police Chief John Cease who heard an area piper playing at an event in 2000.  Chief Cease decided to start the first Police Department pipe band in North Carolina. Chanter classes were arranged for interested police personnel with initial classes taught by former Scots Guardsman Andy Simpson.  Later Kirk Rose, a former Pipe Major for the U.S. Coast Guard Pipes and Drums took over as instructor. Kirk was also the Pipe Major of the Cape Fear Highlanders, a local Boy Scout Venture Crew Pipe Band.

The MacNeil of Barra tartan was chosen for the kilts.  The tartan would honor John McNeill of Whiteville and Lake Waccamaw who was Lt. Hinson’s scoutmaster and first employer. The colors in this tartan complimented the standard police uniform shirts and brought out the blue and gold of the Wilmington Police patches.  The Cape Fear Highlanders had previously chosen that tartan and with both bands wearing the same tartan, the bands could easily combine for area performances.  Pictured below is the band in military dress uniforms. 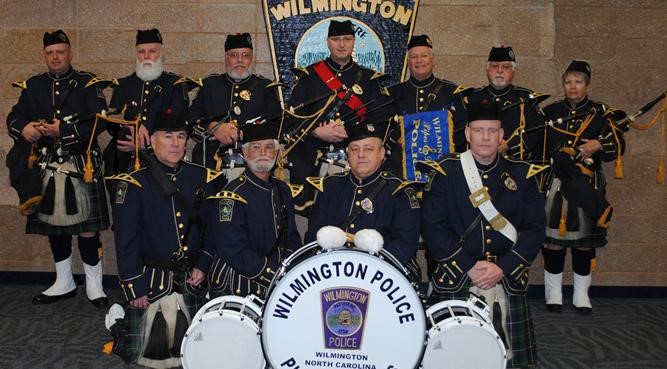 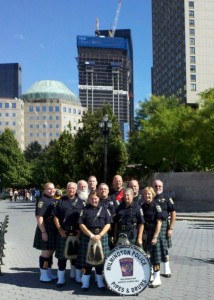 The band ordered pipes from Scotland on September 7, 2001.  Four days later, the Customs Office in the World Trade Center was destroyed during the 9/11 attacks, resulting in an unexpected delay in the shipment of pipes from Scotland to Wilmington.  The band has performed for many 9/11 observances since then and remembers how their original shipment of pipes was affected by this national tragedy.  One of the band’s most memorable performances was the 10th Anniversary on 9/11/11 in New York City. 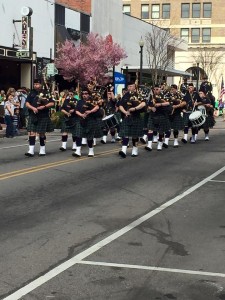 The first performance of the Wilmington Police Pipes and Drums was in May 2002 at the Lower Cape Fear Peace Officer’s Memorial Celebration.  Charter members performing that day were P/M Tom Tilmon, Matt Hinson, Kirk Rose and Timothy Hinson.  Since then the band has consistently performed for police department ceremonial functions, police officer and employee funerals and memorial events, military funerals, and other community events.  A highlight in the band’s history was in March 2010 when the band fielded 21 pipers and drummers at the National Law Enforcement Memorial in Washington, DC, as Wilmington Police Officer Richard Matthews name was added to the Memorial. The band has performed for many years for the annual North Carolina State Police Officer Memorial Ceremony.  The number of band members has ebbed and flowed over the years but several members have been with the band since the beginning, Retired Lt. Matt Hinson, Lt. Tom Tilmon, and civilian volunteers Charlie Cheatham and Judi Smith.   The band’s performances have been predominately in Southeastern North Carolina but the band has also traveled to an officer’s funeral in Pennsylvania and participated in performances in Washington DC and New York City.  An unusual request was for the band to do a Memorial Service on an excursion boat in the Atlantic Ocean off the coast of Carolina Beach, NC.