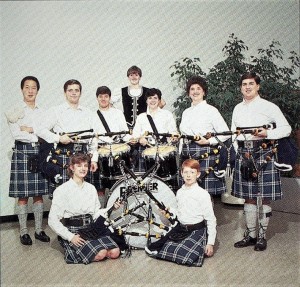 There has been a presence of pipers in the Laurinburg area for many years.  St. Andrews Presbyterian College was founded in 1958 with the merger of Flora Macdonald College (1896) in Red Springs and Presbyterian Junior College (1928) in Maxton.  The schools are located in the Upper Cape Fear region of NC, an area settled by Scots in the 1700’s.  These Scottish roots were evident in the culture of the colleges.  Physical education classes included teaching the Highland Fling, the yearbook was called The Bagpiper, and each spring a guest piper led the graduation processional.  The Fighting Scots at nearby Scotland County High School had pipers as a unit of their marching band from 1975-1988. However, it took the dedication and effort of Bill Caudill to bring to fruition a full bagpipe band.  Upon graduation from St. Andrews, Bill was offered a staff position as director of the college’s Scottish Heritage Center.  His duties included overseeing an historic college collection of old Scottish books, papers and publications; planning an annual Scottish Heritage Week-End; and forming a bagpipe band.  The St. Andrews Presbyterian College Pipe Band made its debut at the First Annual Scottish Heritage Banquet at St. Andrews in the spring of 1991. Members of that first band were pipers Bill Caudill, Director, Courtney Pate, Wendy Gibson, Susan Walmsley, Ian James, Rod Gammon, Kevin Buckley, bass drummer Michelle Duvignez, and two snare 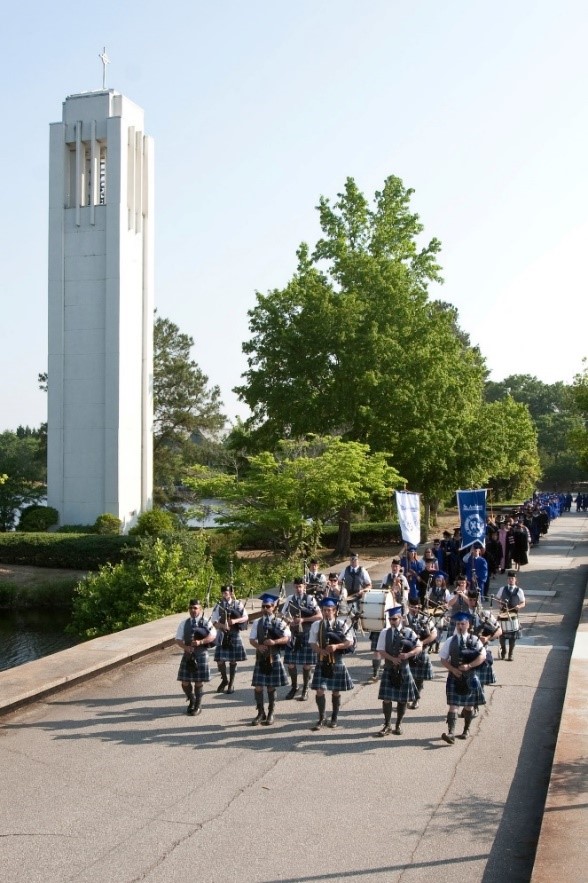 drummers who were sons of a faculty member. In 1991, a new tradition began — the school’s own pipe band leading the graduation processional.

As a private, liberal arts school with a rich history, St. Andrews has attracted students from many states and several countries.  Bill Caudill is well-connected to the piping community as an instructor at the NAAPD, an EUSPBA judge, and an officer in Scottish societies and pipe band associations so he has opportunities to inform high school age pipers and drummers about the school, about the band and about scholarships available to experienced players. Once enrolled, each student takes one semester of private piping lessons for credit.  Most students continue private lessons throughout their college years, showing steady improvement both as a solo competitor and as a member of the band.

The band has been competition oriented from the beginning.  It started out in Grade V in 1992. The newly formed band easily won that first contest. The next year, it competed in Grade V but challenged up to Grade IV and got first or second in each contest.  After being upgraded to Grade IV, the band won each contest entered through 1998. By 1999, it was upgraded to Grade III where it remained a strong contender through 2016. Notable victories over the years include winning the Southern Championship in 1997, 2001 and 2006. Also in 2006, it won the EUSPBA Championship. It went undefeated in 2001 and from 2007 through 2010. One of its most memorable contests was a trip to the Las Vegas Highland Games in 2008 where it won two separate contests.  The high standard achieved by the band is especially remarkable since it is inactive during summer months and begins each fall semester with new students to blend into the band. In 2017, the band dropped back to Grade IV for a year of rebuilding.

On campus, the band plays for the college’s convocation at the beginning of the year and for commencement at the end of the year.  It performs a spring concert on campus during the Scottish Heritage Week-End in March.  It is called on each year to play for St. Andrews Sunday at First Presbyterian Church in Laurinburg and for the St. Andrews Society meeting in Pinehurst.  It serves as the host band for the Scotland County Highland Games, held the first week-end in October. 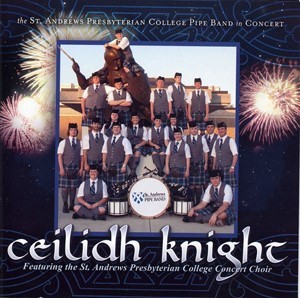 The St. Andrews Pipe Band has made three recordings, each featured on the Thistle and Shamrock Hour hosted by Fiona Ritchie and on the BBC Radio Scotland’s Traveling Folk hosted by Archie Fisher.  The 1998 release was a self-titled recording.  The 2002 release, Knight Life, celebrated the 10th anniversary of a competitive pipe band presence at St. Andrews.  It recognizes the rich Scottish heritage of the Upper Cape Fear with a tract entitled Ancestral Voices, recording six present day descendants of Highland Scots who settled the region.  The third recording, Ceilidh Knight, was recorded before a live audience on the St. Andrews campus on March 20, 2010.

The Errol of St. Andrews tartan was chosen for the band kilts since it shares the college’s name and it matches the blue and white school colors. The uniform is a modern civilian dress with white shirt, gray vest, Lovat blue hose and daywear sporran.

Rewards and Challenges of a School Band

A school band is ever evolving as players enroll, learn and contribute to the band, then graduate and depart.  Promoting the band, recruiting students and soliciting scholarship donations are never ending tasks.  But the rewards are great.  It is heartwarming to see students grow, to teach individuals who rise through the ranks as solo players and become good team members of the band.  The band travels throughout the region, across the southeast and across the country, carrying the St. Andrews name before more people than any athletic team would. In 2011, that name changed from the St. Andrews Presbyterian College Pipe Band to St. Andrews University Pipe Band, after the college became a branch of Webber International University in Florida. 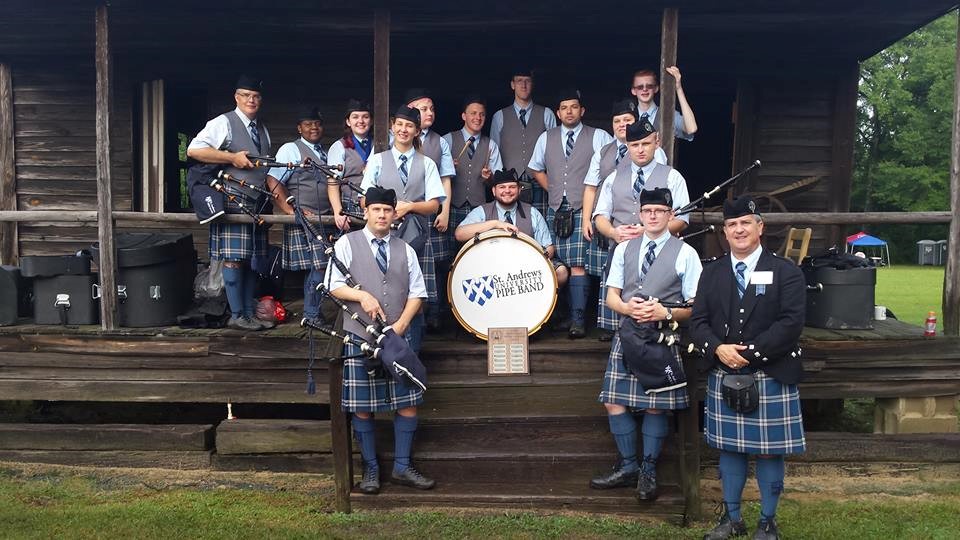