In the fall of 1968, Ted Tonkinson, an NCSU graduate student, ran a small ad in the Technician seeking those interested in forming a bagpipe band.  Among those responding to the ad was another graduate student, Bob Howland, both an accomplished piper and an experienced percussionist.  Together, they started the NCS Pipes and Drums as a student activity.  With the help of former music department chair J. Perry Watson, the new band became a performing group in the NCSU Music Department. Mr. William Muirhead, Sr., a native Scot and successful builder in the area, donated money for ten sets of Henderson pipes and four drums to get the band started.  The band was made up entirely of NCSU students who, in just a few years, were performing advanced, intricate music.  When Tonkinson moved away in 1970, Howland assumed the director role.  In 1977, the band opened up to people from outside the University which allowed several strong alumni pipers to continue playing.  One was John Sprague, an alumnus of the first bagpipe class in 1968.  When Howland left in 1977, Sprague assumed the director role.

Under the leadership of John Sprague, the numbers rose from one band of 12 musicians in 1977 to three bands (Grades III, IV, and V) of 42 musicians by 1997.  During this period, the band was a consistent winner on the competition circuit, entering ensembles in Grades II, III, IV and V over the years.  In 1986, the Grade II band traveled to Scotland where it competed in four contests, including the Scottish Championship and the World Pipe Band Championship.  The band kept a busy schedule of 30 to 40 performances a year.  Regular performances included Raleigh’s St. Patrick’s Day Parade, an annual Music from the British Isles concert on campus, the annual golf tournament at Macgregor Downs Golf Course, the Grandfather Mountain Highland Games, and dedications of North Carolina state museums.

Mandate to Include More Students

In 2005, the City of Oaks Pipe Band merged with the NCSU Pipes and Drums, forming one strong band for the triangle area.  As more and more community people filled out the ranks, the percentage of students slipped.  In 2006, the band was in danger of losing its tie with the University unless a minimum number of students were on the class rolls.  An appeal was put out for students to register for the Beginning Bagpipe Class and within one year the numbers were well above the minimum.  In conjunction with the pipe band’s 40th Anniversary Celebration in 2008, a Pipes and Drums Scholarship Endowment was established by alumni and friends as a means of attracting experienced pipers and drummers to attend NCSU and play in the band.  By 2012, the band was made up of 50% students and NCSU alumni and 50% community members.  It consisted of about 60 musicians, divided amongst four groups:  a beginning chanter class; a performing group that did not compete; a Grade IV band; and a Grade III band.  The competing bands entered 7 to 8 competitions each year at highland games.  John Sprague retired from his role of Director at the end of 2012 after 35 years of dedicated service.

Leadership within the Band 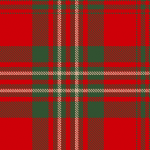 Red Scott (1969 to 1992) Mr. William Muirhead was the benefactor who donated funds for the NCSU Pipes and Drums to buy uniforms.  He owned two kilts, one in his family Lennox tartan and the other in Red Scott.  The Textile School at NC State arranged with Burlington Mills of Raeford, NC to weave the tartan.  The mill requested a sample of the desired tartan and Mr. Muirhead sent what he thought was his Lennox kilt.  When the tartan was already woven and in the hands of Scottish-trained kilt makers at The Clansmen in Toronto, Canada, he discovered he had sent the wrong kilt.  Red Scott is similar to Lennox and the red and white colors proved appropriate for NC State. 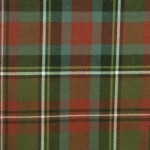 Carolina  (1992 to 2017) The Carolina Tartan was adopted as the state tartan by the North Carolina Legislature in 1991.  Because the band is part of North Carolina State University, it seemed appropriate to wear the state tartan.  In the early 1990’s, muted colors were fashionable and the tartan was altered with brown in place of an olive green.  The tartan is custom woven by D.C. Dalgliesh, Ltd. in Selkirk, Scotland.  The kilts are made by J. Higgins, Inc. in Lenexa, KS. 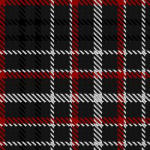 This tartan was the winning design by Kathleen Kelly in a competition for students in the department of Textile & Apparel, Technology & Management in North Carolina State University. The design uses the official university colors.