Pipers in the Asheville Area

A former piper with the Royal Scots Pipe Band in Edinburgh, Scotland settled in Asheville and in 1968, began offering piping lessons to two area young people. John Kiely had recently joined the Charlotte Caledonian Pipe Band and within a year, his pupils– Bobby Clower and Emily Snyder—were also playing with that band for parades and festivals. For two years, 1970 – 1971, Kiely was frequently out of town with his job but Bobby and Emily continued their weekly practices. Kiely gave up travel in the fall of 1971 and resumed offering chanter lessons to interested students. Ken Swinton, a Scot who had played in the Hawick Pipe Band, relocated to Asheville in May 1972, learned of the group of pipers and joined the weekly rehearsals.

The Beginning of the Band

One of the first formal performances for Asheville-based pipers and drummers was at the Folk Festival in Waynesville in August 1972. It was followed by an appearance at Asheville’s Shindig on the Green and the Asheville Christmas parade that November. With a surge of interest in piping, Kiely and Swinton were busy teaching more young people to pipe. As commonly happens, family members were recruited for drummers. By 1973, the group settled on the name Asheville Highlanders and adopted a civilian uniform with Royal Stewart kilts. In 1974, the band was performing regularly in the area, at festivals, conventions, church services, and diversity events. With good publicity and enthusiastic instructors, the band flourished. 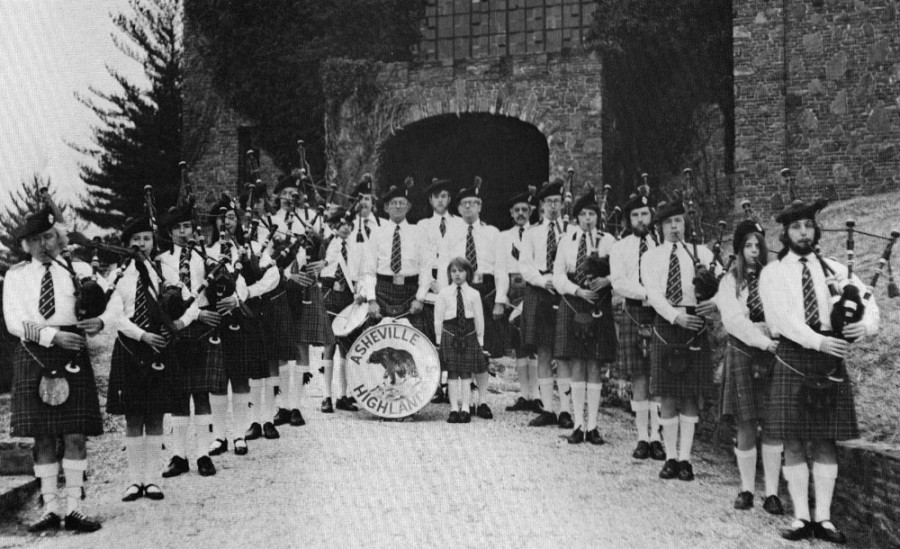 The band’s first competition was at the Charleston Scottish Games in September 1974 where they placed third in the Grade 4 contest. They continued the competition circuit at Stone Mountain (GA), Dunedin (FL), and Devon (PA) for a number of years. Pipers from the band won the Quartet Competition at Stone Mountain in 1975. A band made up of Asheville, NC State and Charlotte Caledonia won Grade 3 at Devon, PA in 1976. The band was upgraded to Grade 3 in 1977 and won that year at Stone Mountain. The band was invited to the Grandfather Mountain Highland Games in 1975, 1976, 1977, and 1978. It continued a busy schedule of varied performances throughout western NC.

John Kiely moved to Canada in 1975. Ken Swinton returned to Scotland in 1977 and Joe Bailey assumed the position as Pipe Major.

The band owed a lot of its strength and success to its talented young pipers and drummers. Then, one by one, they headed off to college. The band was dormant for a couple of years. Emily Snyder and Kathi Graham were living in the Morganton/Hickory area by then and they began regular practices with a few other pipers and drummers in that area. This loosely assembled local group performed for festivals, church services, shopping center events and conferences. At the Grandfather Mountain Highland Games in 1980, Emily and Kathi were inspired to re-form the Asheville Highlanders. With their commitment, and under the leadership of P/M Joe Bailey, the band was once again rehearsing regularly.

In May 1981, a representative of Chimney Rock Park contacted Joe about the band performing throughout the summer at the park. The appeal of a new identity, expanded opportunities to perform, and monetary compensation were all enticing. That summer, the band changed its name to the Chimney Rock Highlanders and performed at the private park almost every week-end. At the end of the season, the band committed to returning in 1982, but the band was not called upon to play there again. Under the name Chimney Rock Highlanders, the band performed at the 1982 World’s Fair in Knoxville, TN, in concert with the Smoky Mountain British Brass Band, and at Asheville’s Bele Chere Festival. It also played for events in Montreat: the Kirkin’ o’ the Tartan church service, the July 4th parade, the dedication of the Historical Foundation and the joint meeting of the Asheville and Holston Presbyteries after two major branches of the Presbyterian Church reunited. 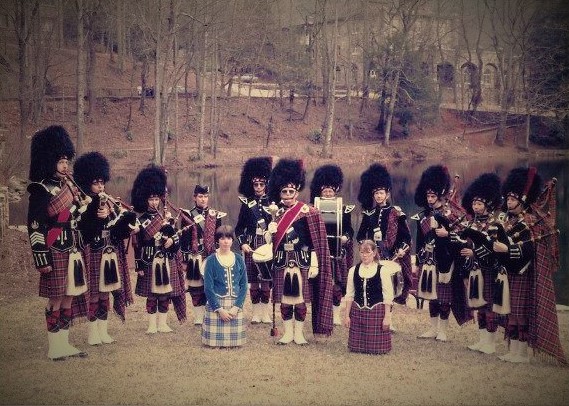 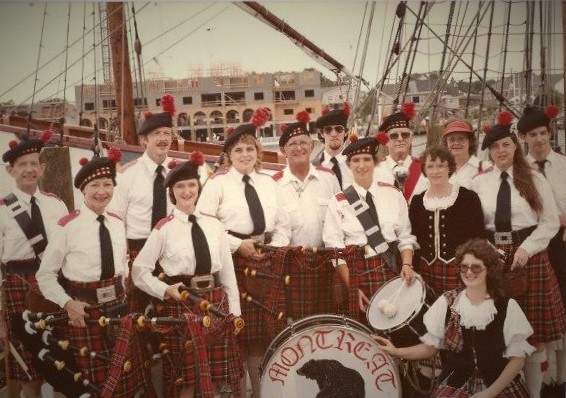 Memorable performances over the next few years included

The idea of having a combined British Brass Band and Pipe Band for the Opening Ceremonies of the Grandfather Mountain Highland Games was that of Robert Blue, a long-time patron of the Games. He sought to re-create a traditional Scottish musical group in which brass horns and special orchestration provide a big, broad and warm sound around the thrill of the pipes. Jim Laughridge, the band director at Avery County High School, recruited sixteen high school students to play brass. The Montreat Scottish Pipes and Drums was asked to be the pipe section. The two bands made their debut at the Opening Ceremony of the Grandfather Mountain Highland Games in July 1986. Because Mr. Laughridge could only find limited scores for brass and pipes, he arranged his own compositions. He and P/M Bailey spent many hours scoring The Gael, the theme music from the movie The Last of the Mohicans. This selection became the signature tune for the band. They kept a busy schedule each year at the Games, doing concerts on Friday, Saturday and Sunday, providing music for the Kirkin’ o’ the Tartan Church service, performing for the Patron and Sponsor’s Reception and the St. Andrew Society of NC dinner. 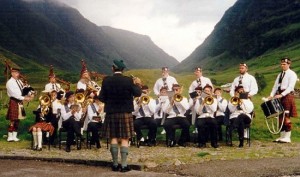 The high school students stayed with the band, continuing to play as accomplished adult musicians. The combined bands traveled to Scotland in 1997, playing at Sterling Castle, Linlithgow Palace, Glen Coe, Brodick Castle and Culien Castle. They made three trips to Virginia and the Washington, DC area, playing at Colonial Williamsburg, Richmond, Washington Cathedral, Kennedy Center, and Arlington Cemetery. They have performed together across NC, from Montreat to Kings Mountain to Charlotte and Pinehurst. The combined bands produced five CD’s over the years. The brass and pipes performed at Grandfather Mountain for thirty years. Above picture was taken in Scotland in 1997. Jim Laughridge conducts the Blue Ridge Brass and Pipes. Standing in back: Joe Bailey, Kathi Graham, Ora Wells, Larry Sorkin, Tim Walker, Scott Elliott, and Fred Woodward.

The Montreat Scottish owes its longevity to the faithful leadership of P/M Joe Bailey, a solid core of committed pipers and drummers, and a bit of luck. The band was on the forefront of band competitions in the South in the 1970’s. It was privileged to perform with the Smoky Mountain British Brass Band and later with the Blue Ridge Brass. Its association with the Blue Ridge Brass led to a trip to Scotland and opportunities to record CD’s. The Montreat Scottish Society helped outfit the band in full military dress uniforms. The band enjoys continued performances in Montreat and at annual festivals, parades, church services, and concerts throughout western NC. 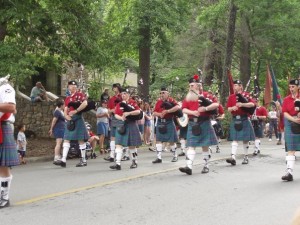