In 2007, a Greenville police officer was killed in the line of duty
and two pipers came all the 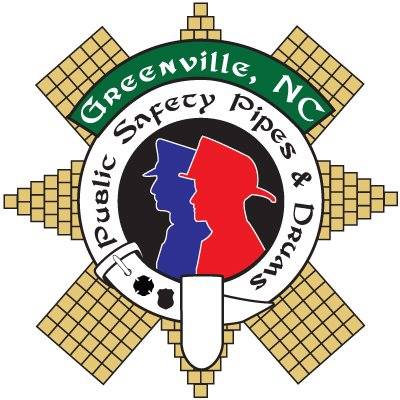 way from the Charlotte Fire Department to pipe at his funeral.  The time seemed right for Greenville to organize its own pipe band for occasions such as this.  Steve Hawley, a public information officer for Greenville, had learned to pipe as a high school student in Rockville, Maryland.  Matt McMahon, a firefighter, learned to pipe from Steve.  Snare drummer Scott Salter and his brother, piper Chris Salter had been commuting to Raleigh to play with Wake and District Public Safety Pipe Band.  In 2009, these four officially formed the Greenville Firefighters Pipes and Drums with Steve Hawley as the first pipe major and piping instructor.  Scott Stanton, a police officer with piping experience, came a bit later as the fifth member.  He was followed by Randy Tyson, a civilian and the current pipe major. The band realized it could not depend solely on firefighters to fill out the ranks, so changed its name to the Greenville Public Safety Pipes and Drums.  It welcomes anyone into the band but sworn public safety officers must outnumber civilians. 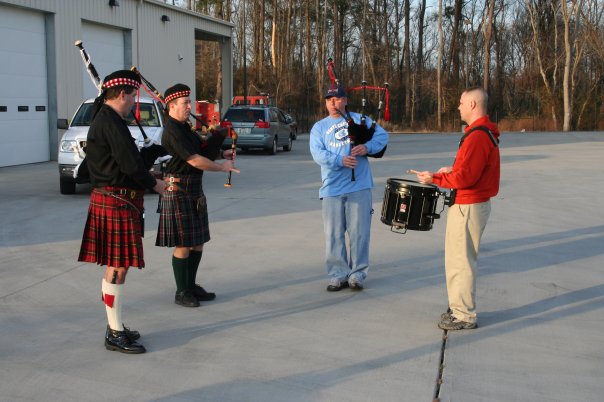 The primary focus is to perform at ceremonies and events for Fire/Rescue, Law Enforcement, and Military in Eastern North Carolina.  The band’s first public performance was a memorable one, the funeral for a Lenoir County deputy who was killed in the line of duty on April 8, 2009.  Over 1,000 people attended the service.  Since then, the band has done other line of duty funerals and military funerals.  The band plays for graduations from basic law enforcement training, officer retirement parties, Veteran’s Day events and city sponsored events such as a domestic violence program.  The band remembers all fellow public safety officers who perished on 9/11 by participating in area memorials on that day.  Members of the band have traveled to Emmitsburg, MD to play at the National Fallen Firefighters Memorial Week-end and to Washington, DC for the National Law Enforcement Appreciation Day. 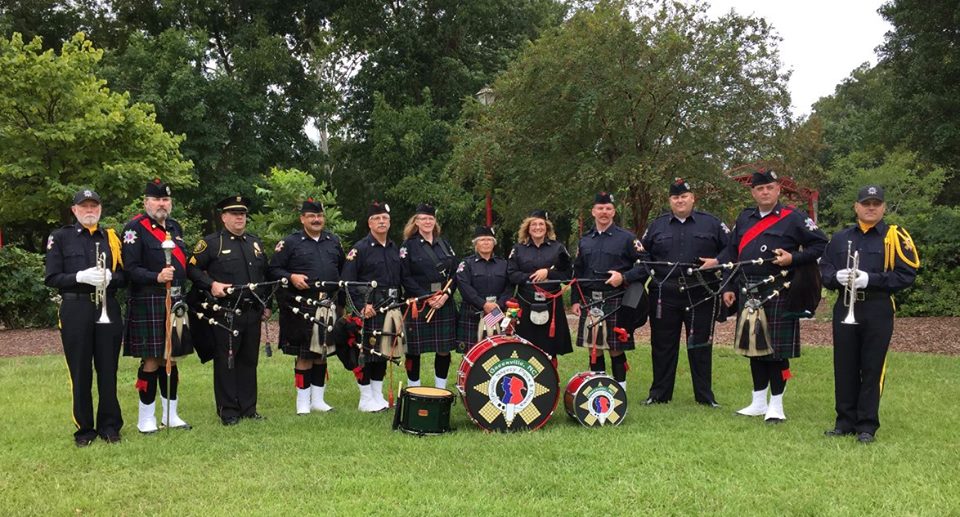 There are ample opportunities for solo players, small ensembles within the band or the full band to perform on a regular basis in and around Greenville.  Although the band depends on income from performances to be self-supporting, it does not charge for non-profits such as Make a Wish Foundation, Relay for Life or cultural programs in schools or churches.

Twice a year the band enjoys St. Patrick’s Day both on March 17 and on Half Way to St. Patrick’s Day on September 17 as the band’s two major fundraisers.  Events include a parade, riding on the Jolly Trolly as part of a bar crawl, and performing for packed revelers until midnight.  Band members mingle with the crowd, sell swag, T shirts, and pint glasses with the band logo. 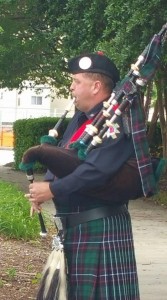 The band chose the Modern Mitchell tartan for its uniform because that tartan had all the colors they wanted.  Steve Hawley already owned a Modern Mitchell kilt left over from his high school days so that was one less to order.  His high school band obtained kilts from the US Air Force Pipes and Drums when that band decided to go with a different tartan. The band has both a dress uniform and a parade uniform. The #1 dress is full military. The parade uniform sometimes uses fire helmets if deemed appropriate. Both uniforms use the blue LAPD shirts with the custom designed pipe band patch.