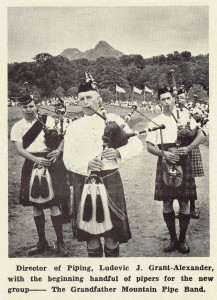 “The Grandfather Volunteer Bagpipe Band made its first appearance on Saturday, July 10, 1965 and also appeared on Sunday, July 11. The group was made up entirely of pipers who attend the Games but have very little opportunity of contributing their talent. It is the intention to make this a permanent feature of the Games. The group will fill in the gaps that appear in every program where a little pipe music cheers, and will no doubt find other useful services in years to come. The band is open to any piper who wishes to join. Last year there were no independent drummers as in former years, this was a pity, but the band performed admirably with pipes only, bagpipes being a very pretty instrument by themselves. The group also marched with the massed bagpipe bands and did a good job too. It was the intention to have P/M Jock Smith from Winston-Salem lead the group, but he was out of the country. The group was led by P/M Ludovic Grant-Alexander of the Citadel, Charleston with the able assistance of Don Robinson of Wilmington.”