The Durham School of the Arts, a magnet school within the Durham County Public School System, provides excellence in visual and performing arts along with rigorous academics for Grades 6 through 12.  The school seeks to offer unusual activities for students to try.  When the school’s photography teacher, Darrell Thompson, presented the idea of starting a bagpipe band, the suggestion was so odd and unusual that it immediately appealed to the principal.  With the full support of the principal and the school administration, the Durham School of the Arts Bagpipe Band launched in the fall of 2007 as a student organization.  Charter members included members with a few years’ piping experience:  Darrell Thompson as the instructor and first Pipe Major; Cameron Brown, a freshman at DSA, and Pipe Major of the band from 2008 to 2011; Connor Thompson; and Bruce Wright as another instructor.  Beginning chanter students were Larkin Taylor-Parker, Graham Austin, Ian Cuncannon, Max Spencer and Henry Worrell.  Joining the next year were Dylan Radford and Shennell Watson.  The band practiced outside, marching on the school’s track as a way to promote the band and to attract new players. 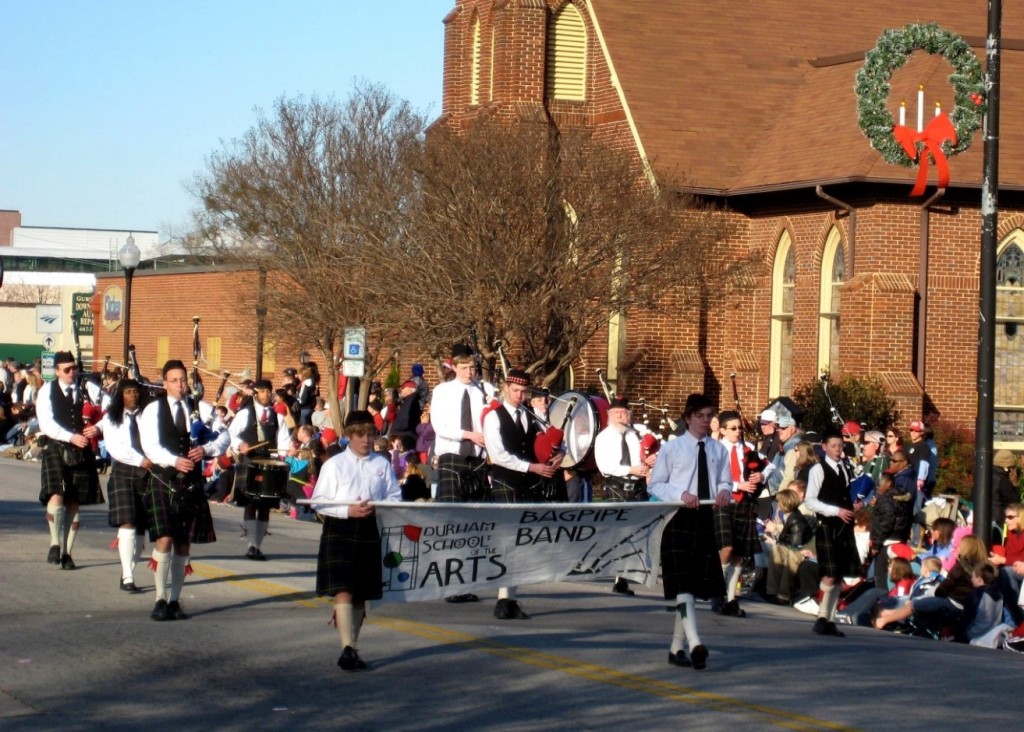 The picture above shows the band’s first performance, the 2008 Cary Christmas Parade, with ranks filled out by a few pipers and drummers from the NCSU Pipes and Drums.

At DSA, the band performed for art show openings and graduations.  Cameron piped for two school plays – Man on a Flying Trapeze and Macbeth.  Solo pipers sometimes played prior to PTA meetings.

A memorable performance for the band was Veteran’s Day at a retirement home.  Band members met a Holocaust survivor who later visited DSA to tell about her experiences.  Another highlight was the band’s second trip to the Bethabara Highland Games when the band was recognized as “The Best New Band” and one of the pipers proudly went forward to accept a trophy.  The band played for Durham’s Art Walk, Durham’s Lacrosse Club, Nasher Museum Family Night, a St. Patrick’s Day event at the Durham Regency Retirement Home, the Durham Christmas Parade and at area elementary schools.

The band borrowed kilts in the McLeod of Harris tartan from the former City of Oaks Pipes and Drums, accenting the tartan with school colors – white shirts, blue ties, blue bag covers and blue garter flashes.

The last performance of the band was at Cameron Brown’s graduation in June 2011.  With his departure, the band no longer had a current Durham School of the Arts student on the roster.

The band was an innovative student activity, providing a unique opportunity for students to engage in something completely new to them.  Through its four-year history, the band grew and its members attained a level of skill allowing them to enjoy performing in a variety of settings.  Several of its alumni continue as valued players in other bands today.