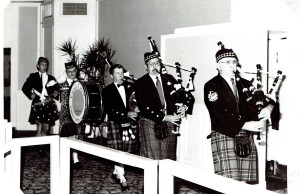 A number of bagpipe bands in North Carolina have come about because of the interest and enthusiasm of one person.  Bob Palmer, an emigrant to Fayetteville from the United Kingdom, was one such individual.  Since Fayetteville was originally settled by Scots, he thought it appropriate for the city to have its own pipe band.  He bought a practice chanter and tutor book and attended the North American Academy of Piping in Valle Crucis in 1984.  Within a year, he was teaching others to play pipes through a class offered by Fayetteville Tech.  A small group of three pipers and two drummers made their debut as a pipe band at a St. Andrews Society Robert Burns dinner in January 1985.  Bob was a natural organizer, promoter, and scavenger. He gained non-profit status for the new band and began soliciting donations.  Through his connections, he learned of a school band in Maryland which had folded and he was able to get all of its uniforms and instruments.  He worked out an arrangement with the director of the pipe band at Scotland County High School, trading spats for glengarries.  Items he could not use were sold and the money invested in what the band needed. 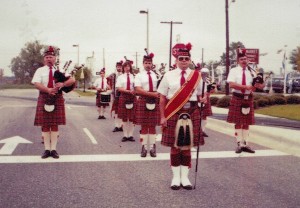 The band was named for Cross Creek, a 1760 trading community on the upper Cape Fear River, the site of the largest settlement of Highland Scots in the 18th century.  In May 1985, Cape Fear pipers played throughout the day at a Sunday on the Square event in downtown Fayetteville as a means of recruiting more players.  A couple of pipers from nearby Lumberton with connections to a Shrine band stopped by. An experienced piper and a drummer who were based at Ft. Bragg found the band.  By the fall, the band turned out a full complement of pipers and drummers for both an International Parade and a Christmas Parade. 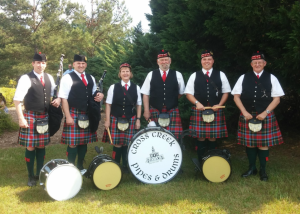 Bob considered different tartans for the band and settled on the new Carolina Tartan.  It was designed by Peter Macdonald in 1981 and woven by D C Dalgleish in Selkirk, Scotland. When Bob contacted Mr. Dalgleish, he was told there were patent rights on use of the tartan.  Bob worked his way through many channels, eventually getting permission to use the tartan from the presidents of the St. Andrews Society in both North Carolina and South Carolina.  With official approval in hand, the tartan was ordered.  The band proudly wore matched uniforms at Fayetteville’s Dogwood Festival Parade in April 1986.  The first kilts were in the original weathered colors with an olive hue.  In 2006, the band switched to the modern, brighter colors of the Carolina tartan.

The band competed for the first time in 1990 in Grade 4 at the Flora Macdonald Highland Games.  Grade 5 was created by the EUSPBA in 1991, and thereafter the band competed in Grade 5.  1992 proved a very successful year for the band as it won contests in Savannah, GA, Alexandria, VA, and Charleston, SC.  In 1995, the band took first at Charleston and in 1997 it won again at Savannah.

The band has enjoyed a wide range of performances over the years, from parades to commencement ceremonies, church services, Special Forces Dining-In, and a performance with the Fayetteville Symphony. The tenor drummers were also Highland Dancers, so the band could add that pleasing visual effect to its performances.  It has enjoyed a close relationship with the Cape Fear Valley Scottish Clans, providing entertainment at their Robert Burns Dinners and Scottish events.  It has also performed regularly at Methodist University.  More recent performances have included a USO Fundraiser, the Stoneybrook Steeplechase, and the Mrytle Beach, SC Highland Games.

The band got its start from the vision of its first pipe major, Bob Palmer.  It improved in quality with the technical expertise of its next pipe major, Bill Palmer.  Located in a transient military town, the band faces the challenge of bandsmen moving in and out of the area.  In its first ten years, there was a turnover of pipe majors nine times. It gained stability under the leadership of Doug Elwell who was pipe major for 12 years.  Since 2006, Peter MacArthur has been the leader, teaching and directing the band.  He combines his vision of the band’s potential with his technical skills as a Grade 1 solo player.  Although the band is not able to field a competition band at this time, Peter proudly touts it as “the best street band in the state”.

The band’s continuing mission is to provide educational and entertaining performances for regional events, to offer piping and drumming instruction to anyone interested, and to actively seek new members who continue the pipe band tradition. 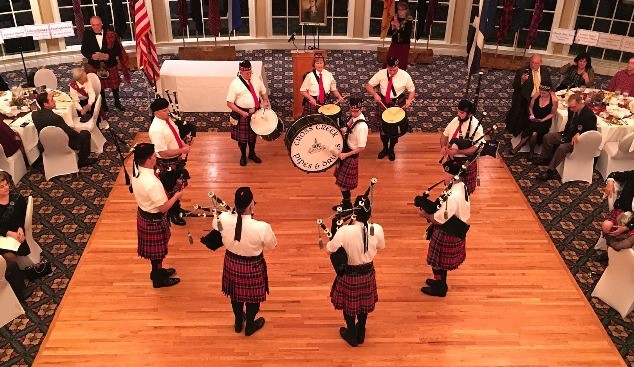