When the NCSU Pipes and Drums was solely a student band, it did not rehearse over the summer. An alumnus of the band, John Sprague, returned to Raleigh from his time in the US Air Force in April 1976. As something to do over the summer, he organized a competition band made up of experienced NCSU pipers plus a couple of other pipers in the area. Initial members in addition to John were Joe Seibert, Chuck Henry, Joey McNeill, Katherine Heath, Tim Cole and Randy Carson. By August, Bill Logan, formerly of the USAF Pipe Band, agreed to serve as Pipe Major. Bill was a professor at East Carolina University in Greenville and built a drum line from ECU percussion majors. Eddie Asten was an Open snare drummer. Two other percussion students, Mike McPherson and Carlton, learned the Scottish style quickly. Tommy Kee an Open drummer in the Washington, DC area agreed to lend his drumming skills. Ruffin Hobbs and Peter Kent, two pipers from Greensboro were also interested in joining the new band. Although band members were spread out over three North Carolina cities, they all shared in common a proficiency in music and connections formed at either NCSU, the Balmoral School of Piping and Drumming or the North American Academy of Piping. Rehearsals were usually held in Raleigh, sometimes in Greenville.

The original name for the band was the Ethos Pipe Band, a name meaning the fundamental character of a culture or group. Ruffin Hobbs’ father, Dr.Grimsley Hobbs, Sr, was the President of the Grandfather Mountain Branch of Clan Cameron and through him, that branch of Clan Cameron agreed to sponsor the band. The Clan provided funds to outfit bandsmen in Cameron tartan kilts and to buy a set of drums. In 1977, the band performed at Cameron Village, a shopping center in Raleigh. They were an invited band to the Grandfather Mountain Highland Games in July. In August, they did an outstanding performance for the LPGA ceremony at the World Golf Hall of Fame in Pinehurst. 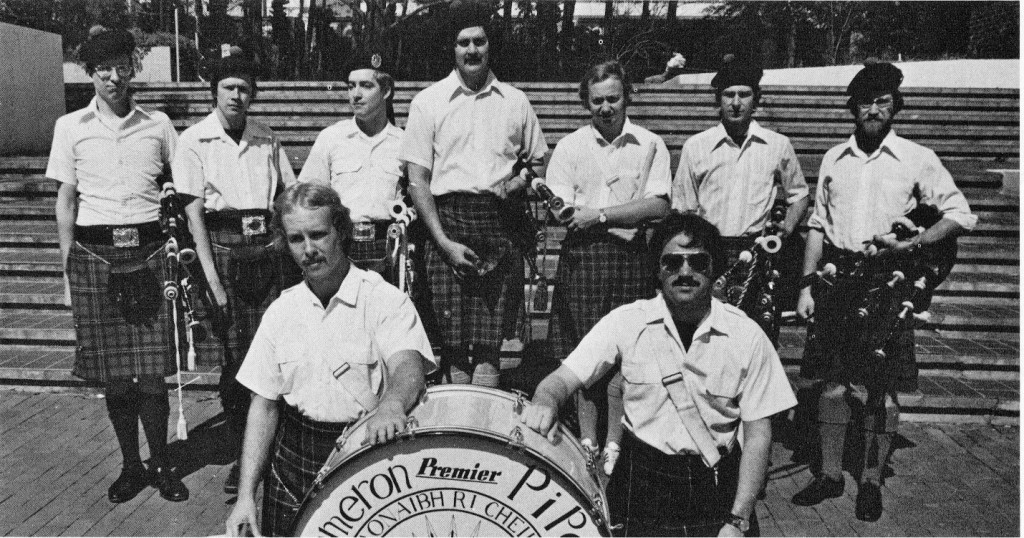 Their first competition was in July 1977 at the Virginia Scottish Games in Alexandria where they won Grade 4. That September, they competed at the Charleston (SC) Scottish Games where they easily won Grade 4. They challenged up to Grade 3 and also won that contest. In June 1978, the band competed in Grade 3 at the Colonial Highland Gathering in Fair Hill, MD, winning that contest. They were full of hopes for continued success.

In 1978, the band was again invited as a guest band at the Grandfather Mountain Highland Games. Most members of the drum corps were involved in a summer drum camp and were unable to attend. Then on the Friday evening of the Games, Bill Logan suffered a cardiac arrest. He was revived but had to give up piping for a while after that. The band carried on as best it could through the week-end. Without Bill’s strong leadership and with no drum corps, the band was unable to compete for the rest of the year.

Pipers Continue for a While

Peter Kent kept a quartet of pipers, including himself, Ruffin Hobbs, Joe Seibert and Chuck Henry, going for a while. They worked on competition music, entering quartet contests at highland games in Virginia, North Carolina and Georgia through 1980.