The Evolution of the Band

The City of Oaks Pipe Band changed its identity a few times during its 20 year existence. It evolved from the Amran Highlanders who in 1985 decided to create a community band for two reasons: non-Shrine members could be members and income from performances could be retained by the band. The newly formed band adopted the military style uniform with the McLeod tartan, the same uniform most members already owned. Through one piper’s connections with Clan McLeod, permission was granted for the band to be called the McLeod Pipe Band. Over time, the original Shrine members left, association with Clan McLeod diminished, and the name gave no indication where the band was located. In 2000, the name changed to the City of Oaks Pipe Band, connecting the band to Raleigh. In 1999, the band assimilated members of the former Occoneechee Highlanders Boy Scout band. These young people added personnel as well as renewed energy to the band. However, within a few years they gradually left, some joining the NCSU Pipes and Drums. By 2005, the entire City of Oaks band merged with the North Carolina State University Pipes and Drums and for the next year, the Grade 4 band was known as the NCSU-City of Oaks Pipes and Drums.

Frank Spears was the first leader of the McLeod Pipe Band. His aim was for the band to be a fun street band. Charter members were: Pipers – P/M Frank Spears, Jack Hines, Bud Cates, Bill Oram, John Anderson and Bass Drummer Jim Oram. Several experienced pipers joined and had higher aspirations for the band. In a document dated 1987, and signed by Frank Spears, Jack Phillips and Tom Finnell, goals were set to improve the band’s sound, make band rehearsals more productive, establish a mix of music for the band’s repertoire, raise expectations for attendance at both rehearsals and performances, and adopt a daywear uniform. It was decided to elect officers who would make decisions for the band. Tom Finnell was elected Pipe Major and served one year. Cindy Visness served a partial year. Gale Buck served the next two years. At the same time, Gale was pursuing his dream of starting a Boy Scout band and once the Occonneechee Highlanders was organized, he turned over his pipe major responsibilities for the McLeod band to Bruce Wright. Bruce provided consistent leadership from 1991 to 1998 and from 2000 to 2005. Ron Shaffer served as pipe major for one year, in 1999.

The band started out rehearsing at the Old Shrine Hall in Raleigh. When there were no more Shriners in the group, it moved to St. Luke’s Episcopal Church in Durham. P/M Gale Buck was a member of St. Paul’s Christian Church in Raleigh, so during his tenure the band rehearsed there. When that location was no longer available, the band moved to Fairmont UMC in Raleigh, another band member’s church.

One of the first major performances was at the Opening Ceremony for the Olympic Festival in Raleigh in the summer of 1987. The band played regularly in Raleigh’s St. Patrick’s Day Parade and in Raleigh and Durham Christmas parades. They were the featured entertainment at the St. Andrew Society of North Carolina’s Robert Burns Dinners for a number of years. Numbers grew and by the late 1980’s, the band had more performing pipers and drummers than any other band in the state at that time.

Bands have their ups and downs. The McLeod Pipe Band almost folded at the end of 1991 when all but two of the pipers had resigned. In 1993, a beginning bagpipe class was advertised in local papers and 20 students responded. The class repeated every six months for the next couple of years. By 1995, there were enough skilled pipers and drummers to once again field a competition band. 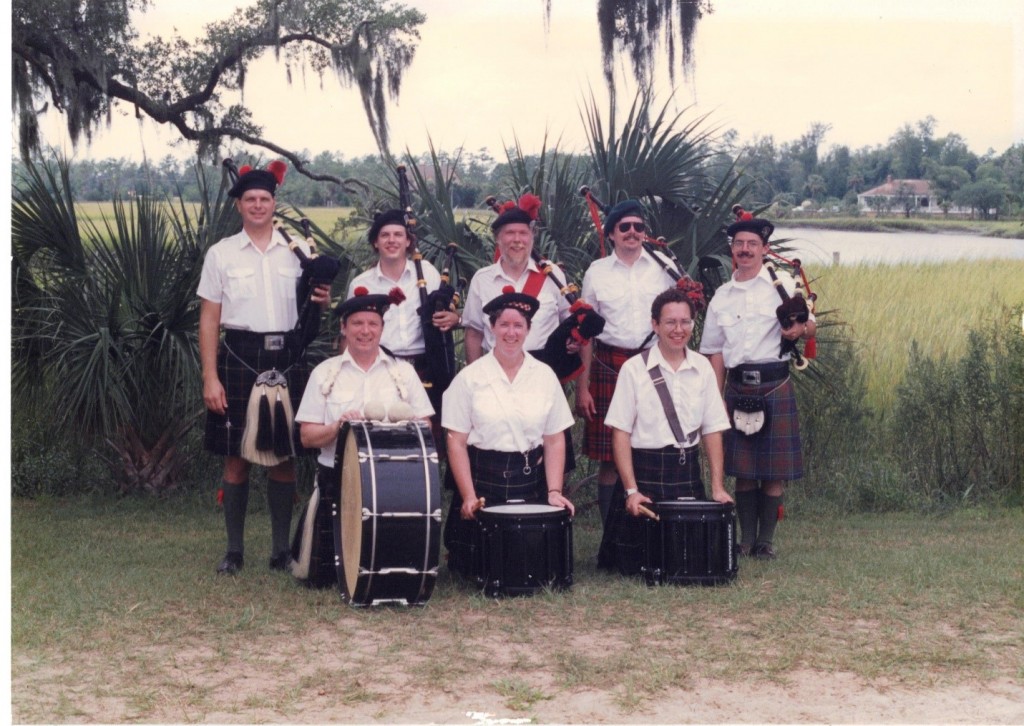 The band reached its peak of numbers in 1999 when members of the dissolved Occoneechee Highlanders joined the band. Parents of the boys were actively involved, enhancing the family atmosphere of the band. Young people tend to grow up and move away. By 2005, the pipe corps was thin. The band still had a good-sized drum corps. The NCSU Pipes and Drums had pipers but was short on drummers. It made sense to combine the two Raleigh bands. Bruce Wright and John Sprague, Director of the NCSU Pipes and Drums, carefully orchestrated a smooth transition as the two groups merged.