The Charlotte Fire Department Pipes and Drums was the idea of firefighter David Thornburg and James Thompson, the Battalion Chief of the Honor Guard in the Charlotte Fire Department. From the start, they set their priorities to offer expert instruction and to present a professional image. The first instructor and Pipe Major was Dave McKenzie. Cecilia Zappa was the first drumming instructor and Drum Sergeant. Chief Jon Hannan, Fire Chief and Homeland Security Director for the City of Charlotte, specified that all band members be operational firefighters. Charter members, meeting in Old Fire Station 4 beginning in 2001, were: Pipers – David Thornburg, Jim Huffman, Jim Carroll, Jerry Price, and Dave McKenzie; Snare drummers – John McGinnis, Jay Meyers, and Cecilia Zappa; and Bass – Troy Ratchford. In the summer of 2003, the band made its debut at the North Carolina Chief’s Association Conference. The original mission of the band was to play for fire department events including memorial services and funerals of fire department retirees, fire department recruit classes and graduation ceremonies.

How the Pipe Band Serves the Fire Department Today

Since 2003, the band has fulfilled its mission by playing for local memorial services for active and retired firefighters. Pipers have played for 9/11 memorials in uptown Charlotte. The band adds its stirring sound and sharp appearance to Charlotte’s annual St. Patrick’s Day parade and Christmas parade. The band goes to Emmetsburg, MD every year for the National Fallen Firefighters Memorial. When fire department bands from across the country combine, the pipe corps averages 70 pipers. 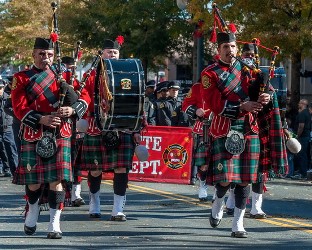 The first tartan used was the National Millennium Tartan because the band started in 2001. Pictured here is the band in its full military dress uniform. Firefighter Joey Cline has created the Charlotte Fire Department Tartan, similar to Black Stewart, which the band adopted. The sporrans are custom made by band member Jerry Price, with “CFD” carved into the leather with silver highlights. Each band member offers his skills not only musically but in the visual presentation of the band.

The Chief of Fire Department, Jon Hannan, has been most supportive of the band. The current Battalion Chief is Lance Foulk.