Jack Steven and Jack Smith formed the Caledonian Pipe Band in Charlotte in 1964. At the time, Jack Steven was President of the Burns Society of Charlotte. Jack Smith, a native Scot, had trained as a piper in the Seaforth Highlanders. He had already assembled a pipe band in Winston-Salem in 1946, the Caledonia Blue Ribbon Pipe Band. Jack Steven must have had confidence that his 80 year old fellow Scot could form another band. He was designated Pipe Major and taught new pipers, using the Logan Tutor Book. The original band consisted of Jack Steven as President of the band, Jack Smith, Tom Cates, Henry Graham, and George Whitefield on pipes, Kenny Smith and George Lund on snare drum, and Tyree McIntosh on bass drum. The band uniform was patterned after Scottish military pipe bands with the Royal Stewart tartan. In honor of P/M Jack Smith’s connection with the Cameron clan, the band wore the Cameron Highlanders cap badge. By September 1966, the band piped for the Burns Society of Charlotte and did its first public performance at a Charlotte Checkers hockey game.

Harvey Ritch began taking pipe lessons from Jack Smith in 1966. According to Harvey, after a few months of lessons he visited a Scottish import shop in New York while on a business trip and was introduced to the College of Piping Tutor book. He brought it back to the band and credits it to helping the band take off. Harvey was a natural salesman, doing much to promote the new band. Jack Smith was busy piping with the Beatty Circus and thus was frequently out of town leaving a void for someone to fill. By 1967, Harvey Ritch was elected Pipe Major. His publicity skills helped recruit new players and secure performances across a wide geographic area. The band grew and its sound improved. Harvey’s next step was to form a competition band made up of the younger players. In 1970, he parted ways with the Charlotte Caledonian band to form his own band, the Charlotte Scottish. 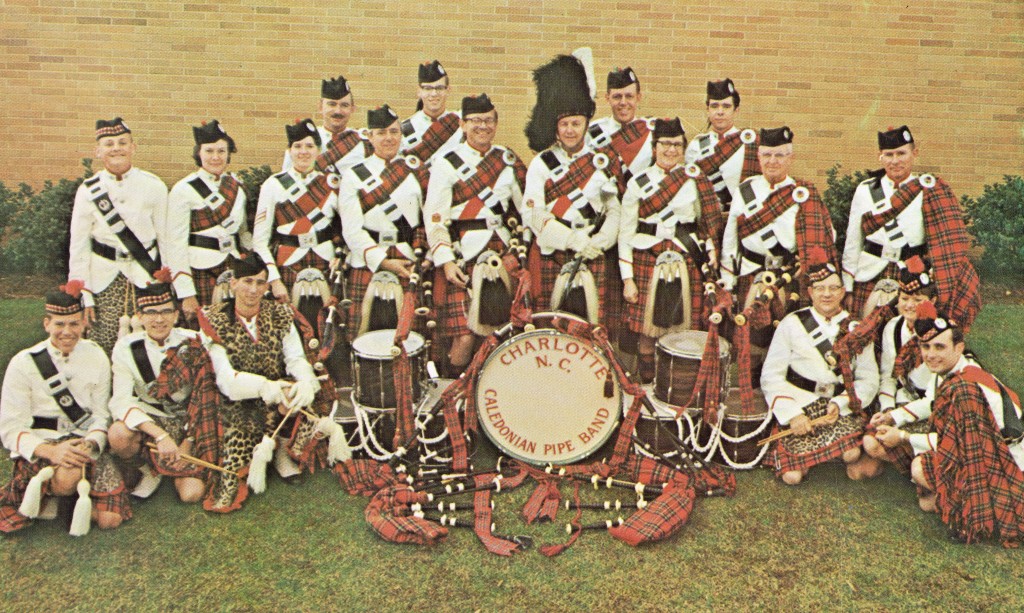 The Charlotte Caledonian band continued under the leadership of Dick Chapin. The band flourished, enjoying a busy performance schedule across North and South Carolina. Within a year, the band leadership decided to field its own competition group drawing from interested pipers and drummers in the area. This move was seen as a way to improve the overall quality of playing. By August 1972, the band entered its first competition at the Canadian National Exposition in Toronto, placing in the top half of 34 bands entered in Grade 4. The following year, in 1973, the band competed at the Dunedin (FL) Highland Games and the Charlotte Scottish Games. In August, a combined group of players from the Charlotte Caledonian, NCSU Pipes and Drums and the Asheville Highlanders competed at the Canadian National Exposition, taking fifth place out of 24 bands. The enthusiasm for competing then subsided. 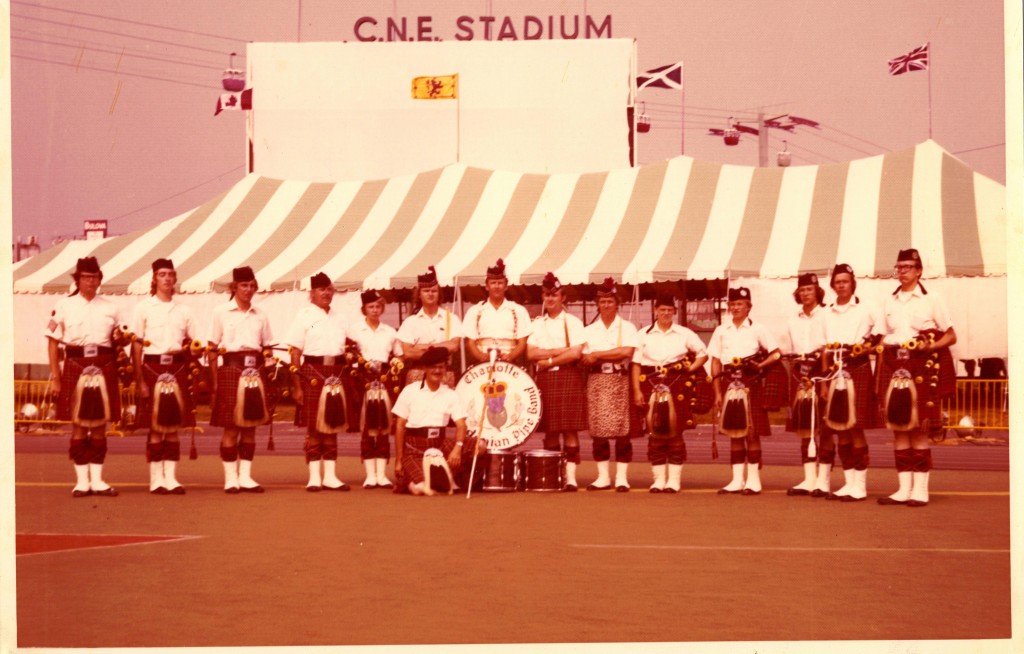 Throughout the 1970’s, the band enjoyed performing with its core group of dedicated players. Because most of the bandsmen lived in Charlotte, it was possible to assemble a performing group for numerous local events. There were few other performing bagpipe bands in North or South Carolina at the time so the band was in demand for parades, festivals, historical re-enactments, Scottish Society gatherings and sporting events. Memorable performances included:

Beginning around 1978, a new wave of talented pipers and drummers began settling in the Charlotte area and joined the band. In 1980, the band elected Arch de Castrique as Pipe Major. The longtime members wanted the band to grow and thrive, but everything about it was changing. The military look was changing to a civilian uniform, including a different tartan, the Stewart of Bute. The music shifted away from traditional tunes to ones unfamiliar to the older members. The talented younger players were eager to compete so the standard of play went up. Performance fees were set higher which seemed out of line to those who had been performing for years. The older players left the band to a new generation. 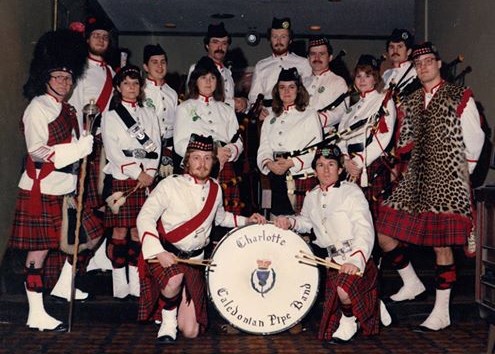 Over the next few years, the band competed in Grade 4 at Savannah, GA, Stone Mountain, GA, Charleston, SC and Alexandria, VA, often making the prize list.

By 1990, a number of key players had left the Charlotte area. Those still around were inconsistent about coming to rehearsals or to performances. The Pipe Major, Timmy Cannon, decided to join the Grandfather Mountain Highlanders, leaving the band with neither a leader nor band members committed enough to keep the band going.

The Legacy of the Band

The Charlotte Caledonian Pipe Band leaves a great legacy in North Carolina piping. It was begun by Jack Smith who was legendary in his own right. It took off under Harvey Ritch who went on to form two other bands and who had a lasting influence over the NC piping scene. The band made a deliberate effort in the early days to bring pipers and drummers together from across the state. Regular band newsletters mailed to all members and friends helped with communication and cohesion. Through hundreds of performances, they introduced the citizens of North Carolina to Scottish culture. Many pipers and drummers today can trace their piping history back to the Charlotte Caledonian Pipe Band.