Two pipers, Bruce Thompson and Michael Holian, met each other at the Ancient Order of Hiberian in Charlotte in 1999. Bruce, originally from New Jersey, had been piping with the Low Country Pipers in the Myrtle Beach, SC area before re-locating to Charlotte. Michael had recently moved from Long Island, NY where he played with various pipe bands. Together they imagined forming a pipe band. The two gentlemen agreed that Michael would teach aspiring students and be the band’s pipe major. Shawn Downs and Scott Sullivan were two of the first students and helped get the band started. Frank Keenan was recruited to be the bass drummer and the band was officially organized in the fall of 2001. The first official performance was the Emerald Ball at Charlotte’s Adam’s Mark Hotel in the spring of 2002. The first parade was Charlotte’s St. Patrick’s Day parade that March.

The band has consistently performed in St. Patrick’s Day Parades since then. Other regular performances have included an annual boat ride on Lake Wylie for developmentally disabled infants through adults in connection with the Holy Angels, a medical facility run by the Sisters of Mercy. The band has provided musical tributes for area Relay for Life events. They play stirring music for the Gaelic Athletic Association in Charlotte, playing for Gaelic football and Gaelic hurling events.

The band enjoys good relations with other Charlotte area pipers and drummers, sharing drummers with the Loch Norman Pipe Band, taking piping lessons from area instructors, and collaborating with the Oasis Shrine Pipe Band. These acts of good will bring together bandsmen from across the city.

The Only Irish Band

The idea for the band got its start at the AOH, a men’s Catholic organization for those with Irish connections. Bruce Thompson already owned a couple of saffron kilts, so the newly formed band adopted the Irish style of uniform. The band has enjoyed its unique Irish identity, socializing in pubs, playing a key role in St. Patrick’s Day festivities, and doing its part to promote Irish sports in Charlotte. 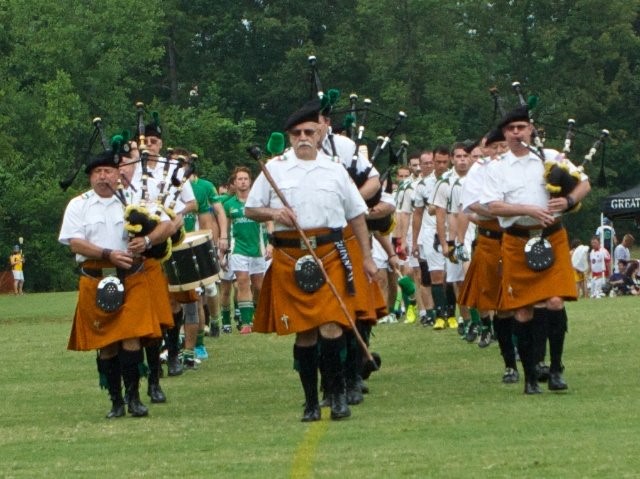