The Cape Fear Highlanders was established as a Boy Scout pipe band in 1999. It was the idea of Darrell Chambers, one who had been active in Boy Scouts for years and was currently taking pipe lessons from Kirk Rose. With his guidance, Venturing Crew 252 was created as part of the Cape Fear Council of the Boy Scouts of America, a troop that allowed both boys and girls to join. Kirk Rose agreed to be the piping instructor and Pipe Major. At a Cape Fear Council Scout Show in 1999, Darrell and Kirk promoted the band, advertising free bagpipe lessons to anyone interested. Drew Creech and David Bleaking, two friends who were in Middle School Band and Boy Scouts together, signed up. Seth Wells and Scott Anderson signed up together. Others who learned about the band through Kirk Rose were Jack Driver, Mark Driver, Timothy Hinson, and Judy McFadyen. Under Kirk’s methodical tutelage, the group mastered the practice chanter, then the pipes. Most drummers were recruited from amongst family members.

As a fund raising activity, the boys went around the field at the Flora Macdonald Highland Games in Red Springs playing a beginning tune on their practice chanters followed by a request for donations. John White McNeill, a big supporter of Scouting, gave generously to the new band. The tartan chosen for the kilts was Modern MacNeil of Barra, in honor of Mr. McNeill.

The first performance was Wilmington’s Azalea Festival Parade in April 2001. It was followed by a successful performance at the annual Cape Fear Council Eagle Scout Banquet. The band continued to play for Scout meetings, the Hammerheads Soccer league games, Wilmington’s Arts in the Park, and Kirkin’ o’ the Tartan church services. It competed in Grade 5 at highland games including Loch Norman, Charleston (SC), Flora Macdonald in Red Springs, and Waxhaw. Many of the members entered solo competitions at the Games, doing very well. Whole families traveled together to the highland games, camping out overnight. The mothers would cook and feed the crowd, some fathers were Scout leaders, and many siblings ended up playing either pipes or drums.

In 2003, Kirk Rose moved away. Seth Wells continued as Pipe Major until he graduated from high school. He continued piping with the St. Andrews College Pipe Band. David Bleaking assumed the Pipe Major position until he graduated from high school in 2005. He continued piping with the NC State University Pipes and Drums. As the core group of Scouts grew up and moved away, the band did not continue. 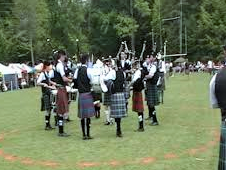 In late summer 2009, Seth Wells revived the Cape Fear Highlanders by recruiting experienced pipers and drummers from St. Andrews College, NC State, and Myrtle Beach with the goal of forming a strong competition band. There were still funds in the original Cape Fear Highlanders account, so this money was used to buy matched pipe chanters and a bass drum. With band members spread out over a wide geographic area, they scheduled monthly week-end rehearsals. Their first competition was in Grade 4 at the 2010 Smoky Mountain Highland Games in Gatlinburg where they easily won. They eagerly anticipated their next competition. It was not to be. The band folded in the summer of 2010.